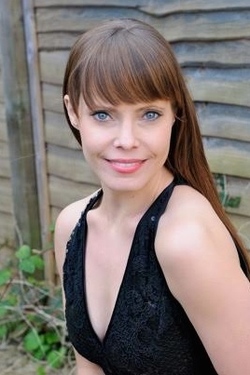 Mariya Krywaniuk is a native of Vancouver, Canada and graduated with a Masters in Music from the Manhattan School of Music. While in New York, Mariya was a prize-winner in the prestigious Gerda Lissner International Vocal Competition and a New York district winner in the Metropolitan Opera National Council Auditions. Mariya has sung on the opera stage and concert platform in the US, Canada, Italy, Czech Republic, Israel and the UK. Roles include Marguerite (Faust) and Alice Ford (Falstaff)/Amato Opera, NYC; title role (Manon) and Violetta (La traviata)/ International Institute of Vocal Arts, Chiari, Italy; and First Lady (Die Zauberflöte)/IVAI, Syosset, New York. In 2007 in Tel Aviv, Mariya sang the role of Mamousha for American Opera Projects in the world première of Jan Hamer’s opera The Lost Childhood. Mariya made her Carnegie Hall solo recital début in 2008 at Weill Hall.

While in London, Mariya has performed the roles of Mimi (La bohème) and First Lady (The Magic Flute) with Co-Opera Co on tour throughout the UK. She has sung the role of Cio-Cio-San (Madam Butterfly) with both Opera Up Close in 2010 and again with New Devon Opera in 2012. In 2013 Mariya covered the role of Cio-Cio-San for Opera Holland Park's Christine Collins Young Artist Programme. In 2012, Mariya sang the role of Gerhilde for the London Wagner Society under the baton of David Syrus. The following year Mariya reprised the role of Gerhilde at Royal Festival Hall for the Wagner 200 Anniversary Concert with Sir Andrew Davis conducting the Philharmonia Orchestra. She then went on to cover the same role at Longborough Festival Opera's Ring Cycle in 2013. In 2015 Mariya covered the role of Mimi with Clapham Festival Opera.
​
In June 2016 Mariya covered the role of Elisabeth in Longborough Festival Opera's production of Tannhäuser. Later that year, Mariya covered the roles of Helmwige, Gerhilde and Ortilinde in Die Walküre with Saffron Opera. In November she covered the title role in English National Opera's production of Alban Berg's Lulu. In March of 2017 Mariya sang the role of Step-mother in the UK premiere of Philip Glass and Robert Moran's The Juniper Tree in London.  Autumn 2017 brought more Wagner. Mariya covered the roles of Third Norn and Gutrune in Gö​tterdammerung for Saffron Opera in September and in October, Mariya covered the role of Woglinde in Gö​tterdammerung for the London Mastersingers.
In April of 2018, Mariya covered the role of Nedda in Kentish Opera's production of I Pagliacci.
In September of 2018, Mariya made her debut in the role of Salome in Strauss' opera with the Edinburgh Players Opera Group. That month she also returned to Saffron Opera Group to cover three Flowermaidens in Wagner's Parsifal.
Mariya sang the title role in Donizetti's Rita in March 2019 in Oborne, Dorset as part of the Opera Cameratina Festival. She sang Third Norn in the Dame Felicity Palmer workshop of Project Valhalla: The English Ring with the Mastersingers of London.
In June of 2021, Mariya covered Gerhilde and Ortlinde at Longborough Festvial Opera.  Mariya made her debut with the Westminster Philharmonic Orchestra performing the Lulu Symphonic Suite and Mahler's 4th Symphony in London in March 2022. Upcoming performances include singing the role of Rossweisse at Pacific Opera Victoria. Mariya will return to the Mahler 4th Symphony in November 2022 for her debut with the Regina Symphony Orchestra.
Powered by